The Mi Home Security Camera 360° has a clean and attractive design, and looks almost like a toy, albeit one that is built solidly. The main camera body is a spherical shell with a pill-shaped cutout that allows the camera lens to tilt up and down. There’s also a microSD card slot below the lens. On the back of the spherical body is the circular speaker grille.

The base has a matte finish and you’ll also find a reset button and a Micro-USB port at the back. The whole device appears to be made out of sturdy polycarbonate. The solid build quality certainly serves as an assurance of longevity. 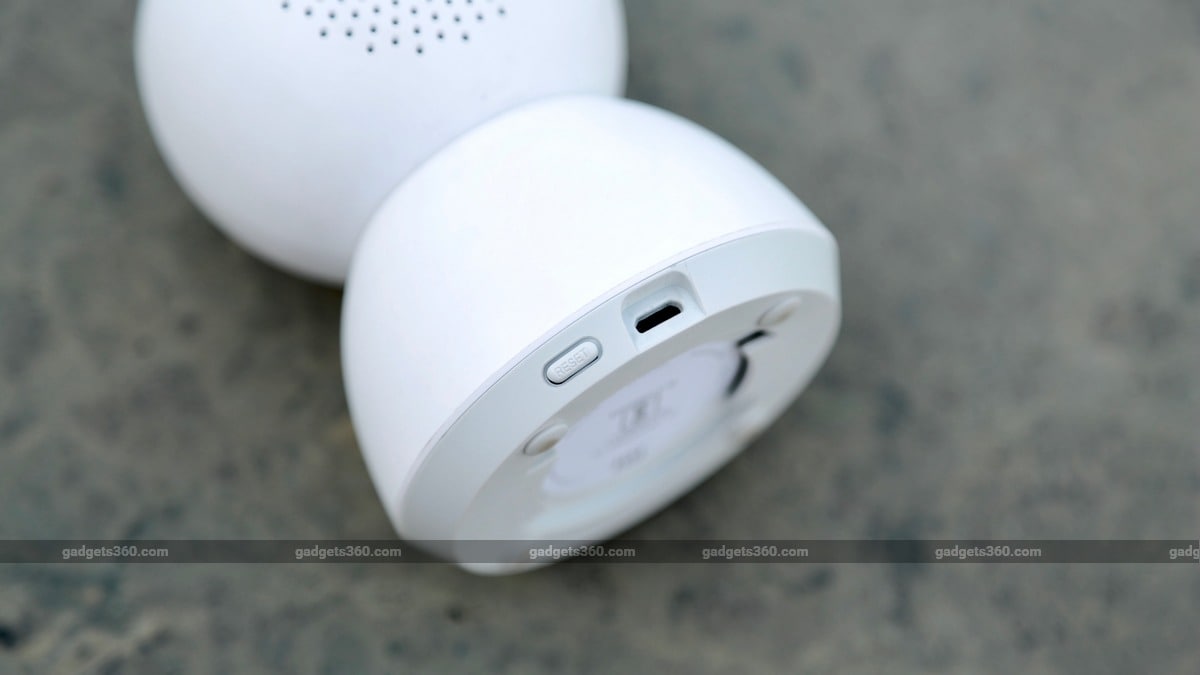 The Xiaomi security camera measures 78x78x118 mm, and tips the scales at 239g. Xiaomi claims that it is designed to be shock-proof, but we advise against testing this claim. The motorised camera movements are smooth, and the device does not make any noise during the calibration process, or in everyday use.

The Mi Home Security Camera 360° has a flat base with four circular grips spaced evenly around its circumference. It can be placed on a table and it won’t wobble, and it can also be mounted on the ceiling. Thankfully, Xiaomi provides the base plate, screws and plastic screw caps needed for this in the retail box. Once the security camera has been placed in your desired location, the only thing that remains is getting it connected and ready, which is quite simple.

First, connect the camera to a USB power source. You can use the USB cable and a 5W adapter that come in the retail package. Doing so will turn an LED indicator on and the Mi Home Security Camera 360° will also provide a voice cue that it has been activated. To begin watching a live video feed, you’ll need to download the Xiaomi Home app, which is available on both Android and iOS, and log in with a Mi account.

Users will have to enter their Wi-Fi credentials in the app. It is worth mentioning here that the Mi Home Security Camera 360° establishes its connection using the 2.4 GHz Wi-Fi band. If you are using a dual-band router, make sure this is enabled, as the 5GHz band isn’t supported. The app then asks for a few permissions and performs a Bluetooth search for the Mi Home Security Camera 360°. Once the device has been paired, the app will show a QR code which must be scanned by the camera to complete the setup process and allow you to access the live feed.

We found the whole process fairly simple, and it can be completed in about five minutes. This is good for people who wouldn’t know how to install a standard security camera. The app guides users step-by-step, and the Xiaomi device also offers instructional audio cues during the whole process.

The Mi Home Security Camera 360° is a 2-megapixel camera with an f/2.1 aperture. The quality of the videos it captures is surprisingly good, especially when compared to what similarly priced offerings from other companies deliver. In well-lit environments, be it indoors or outdoors, the camera captured an ample amount of light in our tests, which means that videos retained a decent amount of colour and looked clear.

Sharpness is decent as well. If you want to adjust the quality of video and images, there is an option called Wide Dynamic Range (WDR) that makes objects in a frame look clearer and less washed out. However, it also makes videos and images a little dimmer. The camera’s field of view is claimed to be 360 degrees horizontally and 96 degrees on the vertical axis.

The biggest strength of the Mi Home Security Camera 360° is its ability to record videos even in darkness. The device comes equipped with eight 940nm infrared LEDs that allow it to record video even when it is pitch dark. The footage we captured in such scenarios were decently sharp and detailed, and although they are monochrome, there is very little grainy texture. The camera can automatically switch between night and daytime modes when needed. The night mode works best at a range of 8-10m.

The edges of objects were fairly clear and there was also a good amount of detail in the images and videos we captured, especially when compared to what we’ve seen with security cameras from companies like Godrej. There is another feature called ‘Full-color with low-light’ that tries to retain as much colour in videos and images as possible in sub-optimal lighting conditions, before switching to the infrared-assisted monochrome mode.

On the downside, we found that some parts of the recorded footage, particularly when the camera was being repositioned using the D-pad, exhibited some blur. We also noticed that objects at the edges of any frame tended to have a barrel distortion effect. Even after enabling ‘Lens distortion correction’ the peripheral warping was still there to some extent. As far as home monitoring goes, you can choose between 24-hour camera surveillance, daytime or night-time recording, and a custom schedule. 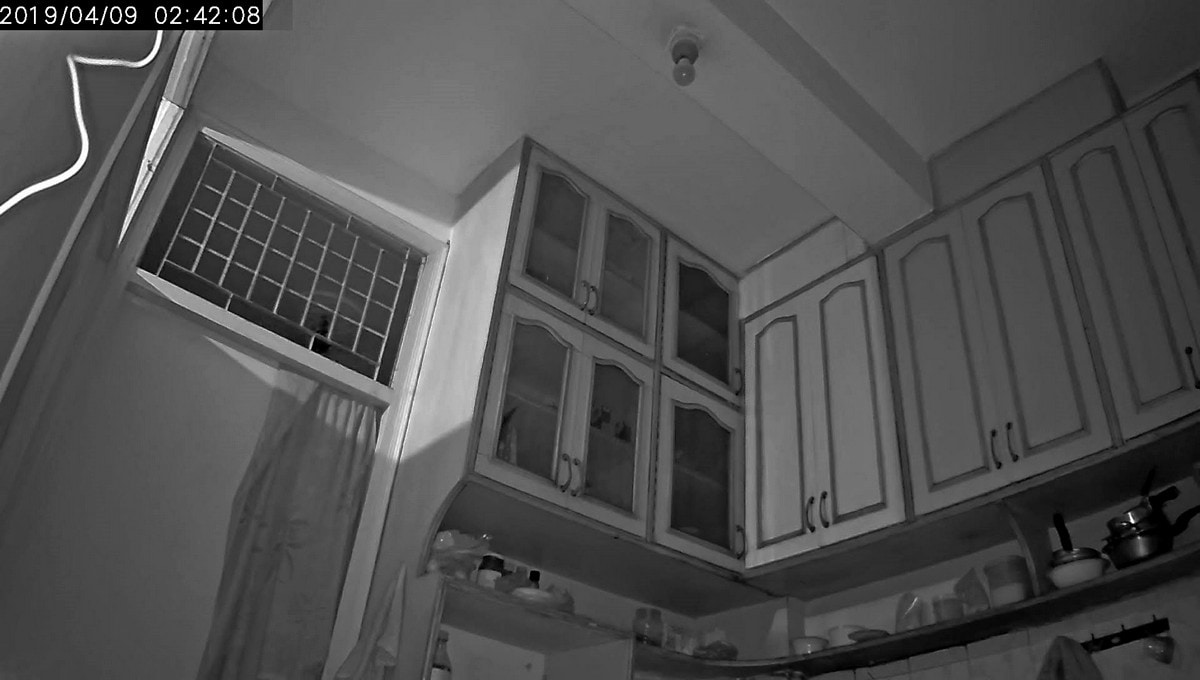 One shortcoming is that Xiaomi does not provide an option to back up recorded footage to a cloud storage service, which means users will have to rely on a microSD card or a separate backup solution for whatever network device files are being stored on. Even though this does not impact day-to-day performance, it would have been useful and convenient for users.

AI-assisted motion detection is really effective. Even at night, the camera was able to capture the movement of a small insect hovering near it, and sent an alert. Once motion is detected, the camera will instantly send a notification and record a 10-second clip. A log of all such motion detection alerts, along with the recorded clips, can be accessed by tapping on the “Monitoring” option on the Live Feed page in the app.

One of the best features of the Mi Home Security Camera 360° — and one that has been executed quite well — is the talkback feature, which basically allows users to speak with people back at home or wherever the camera has been installed. Just tap the call button on the Live Feed screen and you are good to go. We found the voice quality to be decent with clear audio on both sides. While the speaker did a good job at relaying voices, the camera’s microphone tended to pick up a little bit of background noise if there were objects like a fan, for example, within its range.

You can choose to record videos in HD or Low quality, if you don’t mind losing a bit of sharpness and colour output in order to reduce file sizes. In both modes, the resolution remains the same at 1920×1080 pixels. The same goes for stills captured at either setting. Xiaomi claims that the Mi Home Security Camera 360° uses advanced video encoding technology that can reduce video bandwidth usage by around 50 percent and allows for faster video streaming to a smartphone or tablet.

As for the recorded videos and photos, they can either be stored locally on a microSD card of up to 64GB capacity, or sent to other devices on your network for storage. Data transmission is encrypted as a security measure.

The clean interface of the Xiaomi Home app is a bonus. The home screen is where users can choose the device whose live feed they want to watch. There’s also an Inbox where you can see a history of all the motion detection alerts, along with shortcuts to the Mi online store, Mi Community, and your Profile section. The live feed page, which appears after selecting the device, shows the camera’s feed on screen with a D-pad for controlling its movement. The voice call button is flanked by Monitoring, Playback, Photo Album, and Shortcuts buttons.

The Monitoring section shows past notifications and lets you watch the 10-second clips recorded automatically. The Playback section is where you can watch videos recorded by the camera, while the Photo Album is for stills. The Shortcuts button provides quick access to the sleep mode, camera calibration, and pop-up window tools. 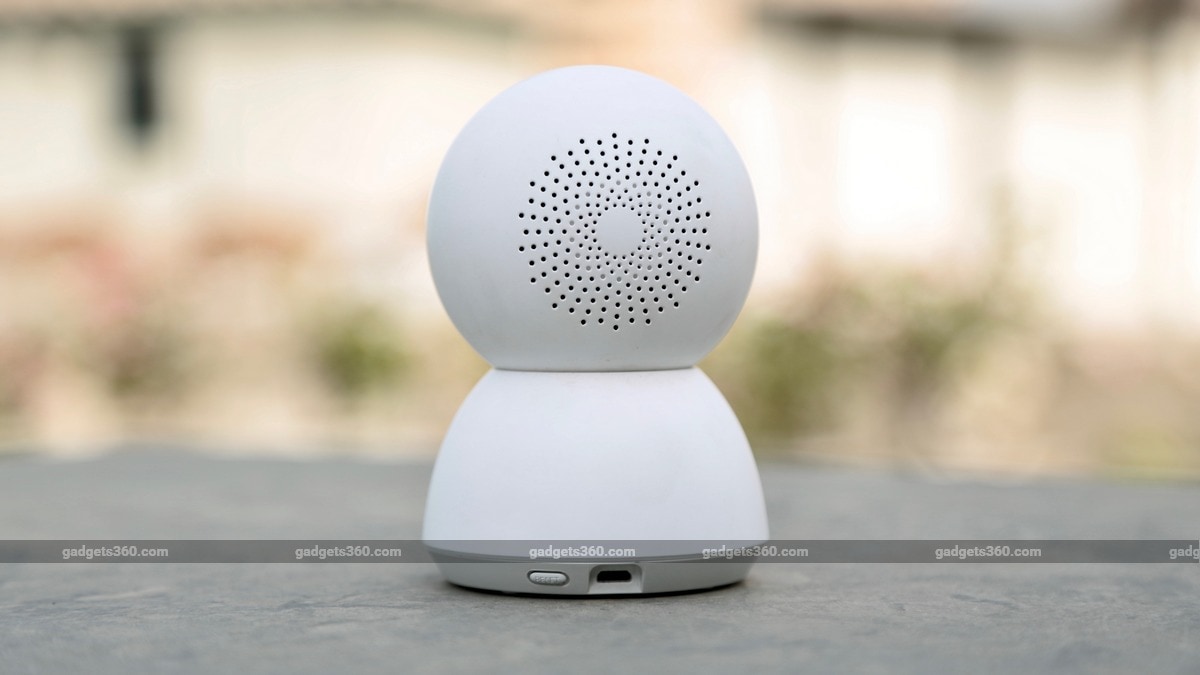 The onboard speaker produces clear sound to facilitate the talkback feature

The camera has a sleep mode that lets users shut it down without having to disconnect it. You can activate sleep mode manually with the tap of a button or by setting up a custom schedule. When you wake the device from sleep, it takes a few seconds to recalibrate itself and begin transmitting the live feed. There’s a slight additional delay if the camera has to switch itself to Dark Mode immediately after waking up.

Verdict
The Mi Home Security Camera 360° perfectly channels Xiaomi’s ‘more bang for your bucks’ philosophy, and is feature-rich as well as affordable. With an excellent build quality and design, ease of use, a large number of features, and the overall quality of its recorded video, this Xiaomi offering is easily one of the best devices in its segment.

The lack of cloud storage and a few minor media output quirks are shortcomings, but they aren’t major red flags. Currently going for Rs. 2,699 from the official Xiaomi online store and Amazon Indi, the Mi Home Security Camera 360° offers excellent value for money.

Affiliate links may be automatically generated – see our ethics statement for details.

Previous 53 Apple Watch tips and features: become a smartwatch ninja
Next How to add fingerprint authentication to your Windows 10 computer